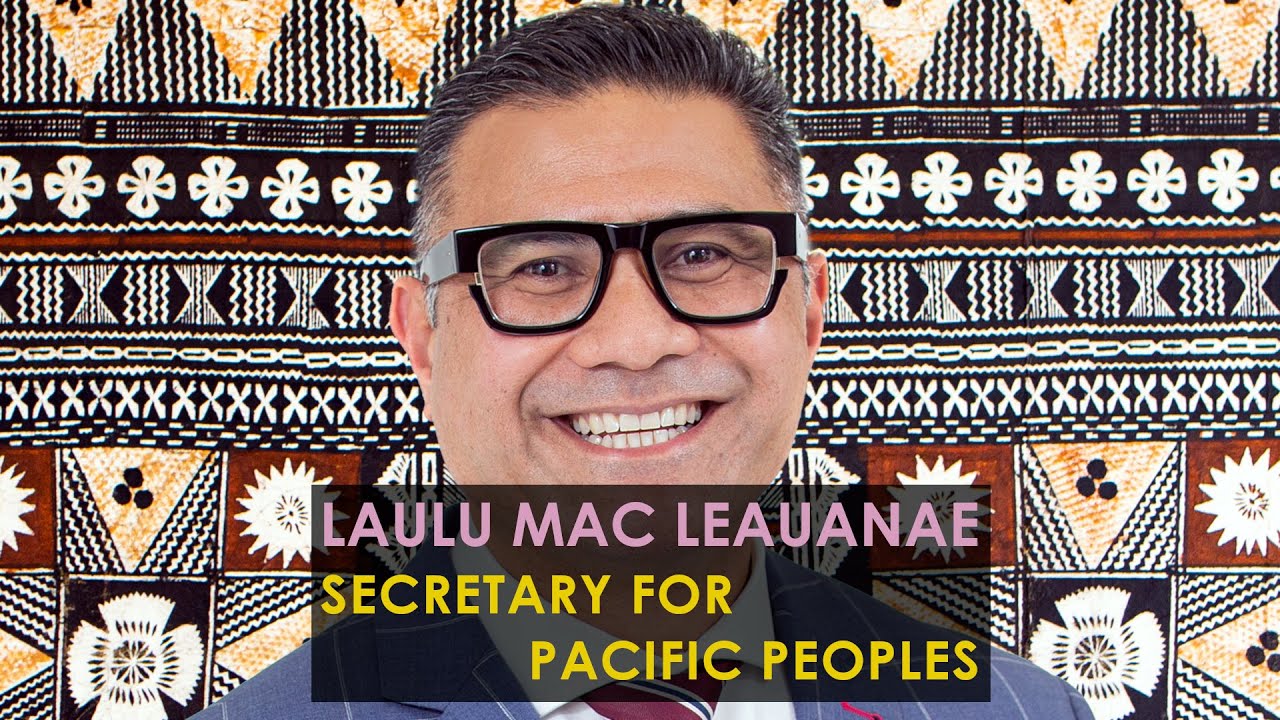 Or listen to the full podcast of Spotify

A thriving, prosperous, resilient and confident Pacific Aotearoa are key pillars for the team at the Ministry for Pacific Peoples. Laulu Mac Leauanae, Secretary for Pacific Peoples also Chief Executive for the Ministry, leads a team of more than 150 staff across the country with the primary focus to ensure the voices of Pasifika are heard and the initiatives that come out of those voices are delivered, and delivered well.

He credits his drive for a more prosperous future for Pasifika to his parents and their journey from Samoa to New Zealand that began in the early 1960s. Of Samoan descent Laulu hails from the villages of Iva, Faala in Savaii and Si’umu and Sa’anapu in Upolu.

Laulu is in awe of his parents’ journey as migrants to New Zealand. Not only the hardships and the difficulties they endured, but he says the many blessings they achieved. Growing up in Massey in West Auckland and attending the EFKS church in Henderson he recounts the lived experience of growing up surrounded by their Samoan community.

We go through the experiences as New Zealand born, challenges of school and your identity. When you see your parents thrive with the limited resources they had. They were able to buy a home, provide a roof over my head. I lacked for nothing and while I didn’t get everything that I wanted, there was a real love.Laulu Mac Leauanae

After working in the public sector in health, management, business and leading projects for the Pacific region Laulu says moving into the space to lead the Ministry for the past five years was a natural progression. Laulu reflects on the journey the Ministry has taken, supporting successive governments as the principal advisor on all policies and interventions that impact and improve outcomes for Pasifika people over the course of 30 years.

Laulu says while it has been a long journey for the Ministry, they have continued to push through the agenda for Pasifika.

For the ministry it’s based on the statistics. We still have a long way to go when you look at the baseline of where we sit as a community from health to education to wealth, homeownership to our languages, culture and identity. There are elements where we’re still quite poor, yet the Ministry has been able to do a few important pieces of work to support the system, to support the government to provide better policies that impact on our communities.Laulu Mac Leauanae

Kapasa Pacific Policy Analysis Tool was co-developed with the department of  the Prime Minister and Cabinet in 2016 supporting agencies to develop policies programs and services that integrate Pacific People’s perspectives. Laulu has been at the helm of the Pacific Aotearoa Lalanga Fou report. The Ministry engaged with the Pasifika communities throughout the country to provide a vision and strategic goals for a new Pacific.

Four key strategic goals and visions were created out of the consultation and discussion with Pacific peoples. Laulu says the vision is “we are Confident in our endeavors that we are Thriving, Prosperous, Resilient Pacific Aotearoa.”

He says Lalanga Fou has been able to outline a system to government on how best to deliver initiatives for our communities. “We’ve systematised the voices of our people so that when we engage with Pacific through the government system that we’re doing it in this specific well-being targeted approach under the Pacific Aotearoa Lalanga Fou. Through Lalanga Fou the Ministry has secured 63 million dollars for Pasifika initiatives.

Laulu says they continue to work on the process to measure the impact of the Lalanga Fou work, which is underway with their research and evaluation team.

While engaging with the Pasifika community Laulu says the talanoa was powerful. He says while there are regional differences there were also key similarities.

Laulu says the work to develop the Ministry continues and he is proud to see the Ministry grow and the talent of Pasifika coming into the organisation. “It’s happening throughout the whole agency. It’s been beautiful to see, because when I first started the sense was ‘there isn’t the Pacific talent here, where are they?’ And I would say to my colleagues, I’m of this generation that was born and raised in New Zealand, I am Kiwi but I’m also Pacific. You appoint me as Chief Executive and I’ll run this agency in a manner that reflects our Pacific New Zealandness.”

Laulu is confident they are on track, working to shift the dial for Pacific peoples.

We have a saying at the agency – the three Hs – Hustle, Hungry, Humble. We have to be hungry, never forget where we come from, always have a sense of hunger that we’re fighting for something greater than us, and third, through it all remain humble. We don’t want to be showing off about whatever we’ve done because what have we done? We haven’t done anything. There’s still a lot of work to be done, so we are humble hungry hustlers for our communities.Laulu Mac Leauanae