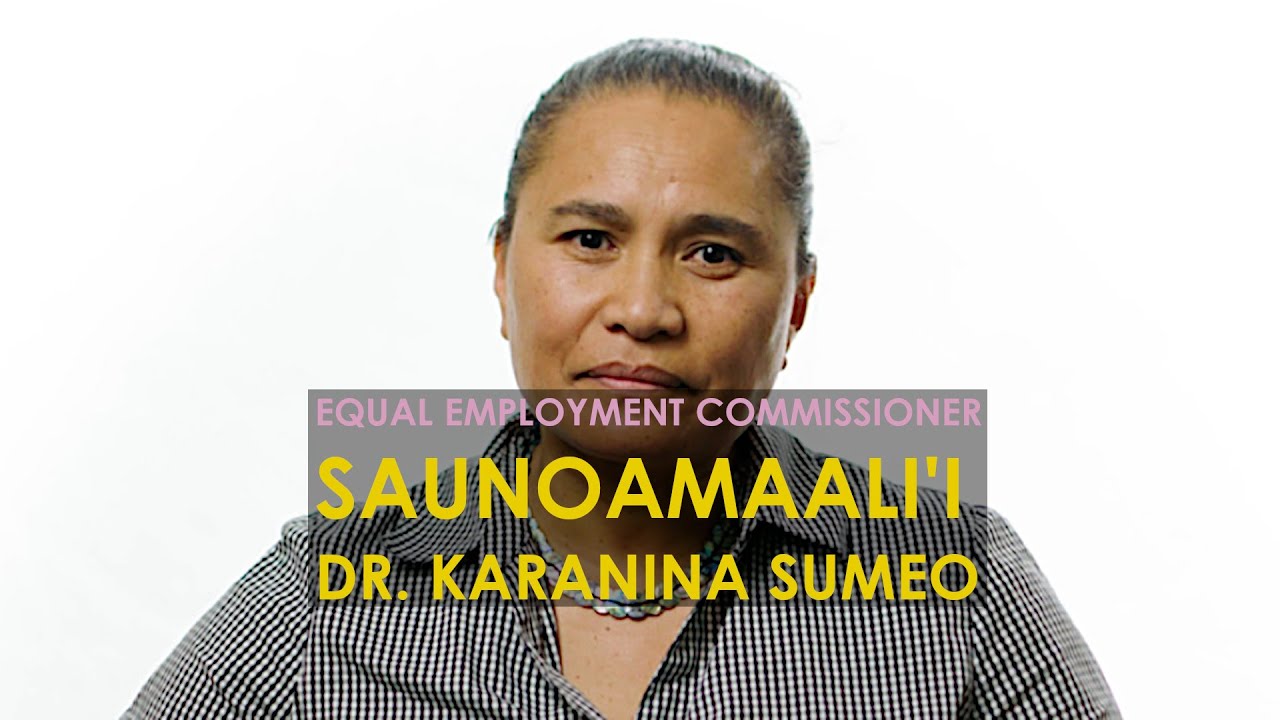 Or listen to the full podcast on Spotify (31mins)

Talking about the uncomfortable issues around employee rights and discrimination within the workforce, pay equity, gender bias, bullying, and sexual harassment is something the Equal Employment Opportunities Commissioner for the Human Rights Commission (HRC) says we need to get comfortable with.

Saunoamaali’i Dr. Karanina Sumeo advocates for the promotion of economic development, social, and employment interests of marginalised groups, particularly women and Pasifika people. She says while it is uncomfortable to talk about discrimination, that is the reality. She says it is the lived experience of Pasifika people. She believes with more dialogue they can begin to understand what the barriers are and what can be done about it.

Saunoamaali’i who hails from Samoa from the villages of Vailima and Fusi Safata and Lalomanu, says advocacy alongside the promotion of respect and understanding of human rights are key components of her role and added to this, equity and the promotion of women’s rights in business.

In 2020 Saunoamaali’i and the HRC embarked on the inquiry to look into the pay gap for Pasifika people in the work force. Talanoa, Human rights issues for Pacific peoples in Aotearoa New Zealand paints a grim picture for Pasifika.

Saunoamaali’i says generally Pasifika people are paid less than any other ethnic group by comparison in Aotearoa. “It is a prevalent pattern and that’s one of the things that we’re hoping to address. Certainly in terms of understanding equal employment opportunities, I think we’ve got a long way to go into understanding what that means.”

Gender bias is another area highlighted. Saunoamaali’i says while women hold senior position in the public service, it is not the case in the private sector. She says there is still a huge gap and one would be hard pressed to find a Pasifika person amongst those who are progressing. In her discussion with some Pasifika peoples they have said even when they are progressing they discover they are being paid unequally compared to their colleagues.

Saunoamaali’i acknowledges that it is a hard truth for New Zealand; a country that prides itself on being equal, fair and being diverse. But she adds the reality is different. However she is encouraged with the formation of the Pacific Pay reference group for the inquiry that was launched last week, with representatives from the Pacific Business Trust, Employers and Manufacturers Association, public service and businesses leaders from the private sector who will look at challenges in the workplace to explore why this has happened and why it continues.

She is pleased the conversation is underway not only for those who suffer from inequities and discrimination but also to highlight failures in the system. She notes another concern is protection for those who speak up against discrimination. Saunoamaali’i says support mechanisms must be in place to protect people who speak up. She says businesses, including Pasifika business and organisations, need to be part of the discussion to address the issue.

It’s really hard to take on power and take on authority and to have very little money to equip yourself with a lawyer. It’s like a a multiplicity of barriers for justice, and it’s just easier to walk away with at least some of your self intact. And it shouldn’t be like that. It should not be like that. We’ve got a big task ahead of us but we need to get there soon.Saunoamaali'i Dr. Karanina Sumeo

Despite the doom and gloom Saunoamaali’i is proud how people rally in times of need. She says COVID-19 was a good example of this as churches, non-government organisations and community groups made sure the food banks were there for people who needed it. The public services worked overtime to get the policies right around the wage subsidies to ensure businesses could pay staff. She notes how vital essential services are and continue to be.

We’ve learnt a very humbling lesson … without those roles we would be helpless as a community. So without our caregivers, without the people growing and picking the fruit and the vegetables, without people at the supermarket we will be helpless as a society. So I’m looking forward to the day when we can act to actually address that inequity and value those roles more. Saunoamaali'i Dr. Karanina Sumeo

Saunoamaali’i admits there is a long way to go, but is confident the country is ready to go there, ready for a better fair New Zealand.

Whatever we learn from this inquiry it will help address some of those practices that victimise anyone whether you’re Pasifika or not, whether your a young person, with a disability who’s being unfairly remunerated for your work. It’ll be a snapshot in time but we must focus on those right at the bottom which is our people because they deserve better and they have rights and New Zealand has human rights obligations. And if this is what it’s going to take for our government to pay close attention, then that’s what we’re doing.Saunoamaali'i Dr. Karanina Sumeo
Image Credit: Human Rights Commission