The award winning artist behind the creation of the Pacific Islands Memorial Te Reo Hotunui o te Moana nui a Kiwa at Pukeahu National War Memorial Park in Wellington, hopes the monument will gives families the chance to engage and claim this piece of history for their loved ones who gave their lives during war time.

Speaking to Pasifika Wire in March after the launch, alongside lead architect John Melhuish and Ministry of Culture and Heritage Memorials Manager Brodie Stubbs,  Michel Tuffery talked about his journey creating the concept, the design, and getting the community input. He says he was overwhelmed with the response.

“We needed to check all the names of the grandfathers and the people that actually served in the First World War from the Cook Islands, Niue, and from the various islands. All of a sudden we got photographs and names put to us straight away and people from the diaspora that are actually born here in New Zealand who had no idea that their grandfather had fought in the First World War.”

“It actually just got the community talking. It was a learning experience for me especially with the community and just the diversity, and I’m not just talking about Polynesian we’re talking about Micronesia, Melanesia,” says Michel, adding there were some challenges to ensure that it was a representation of all Pasifika.

And this is what the difficult process of actually how do you embrace the rest of the Pacific without being, “ok so its a Cook Island narrative” but at the same time the difficulty is actually trying to get everyone and covering it aesthetically on the actual sculpture itself.Michel Tuffery

Michel says a lot of work went on behind the scenes to ensure the essence of not only Pacific but tangata whenua was captured in the memorial. “Even down to the Maori stones that are laid around the sculpture, the rocks that came from all parts of the Pacific. That was really important to have that there. Even getting the tangata whenua involved, we had to get the name, we were adamant it wasn’t going to be a Cook Island or a Tongan name it had to be tangata whenua out of respect, and I think that set the precedence because it was on their space.”

The name is Te Reo Hotunui o Te Moana nui a Kiwa – The Deep Sigh of the Pacific. The design recalls the conch shell left in the Arras Tunnels by Kuki Airani (Cook Island) soldiers of The New Zealand tunneling Company and the New Zealand (Māori) Pioneer Battalion, who were stationed beneath the town of Arras during 1916 to 1918. 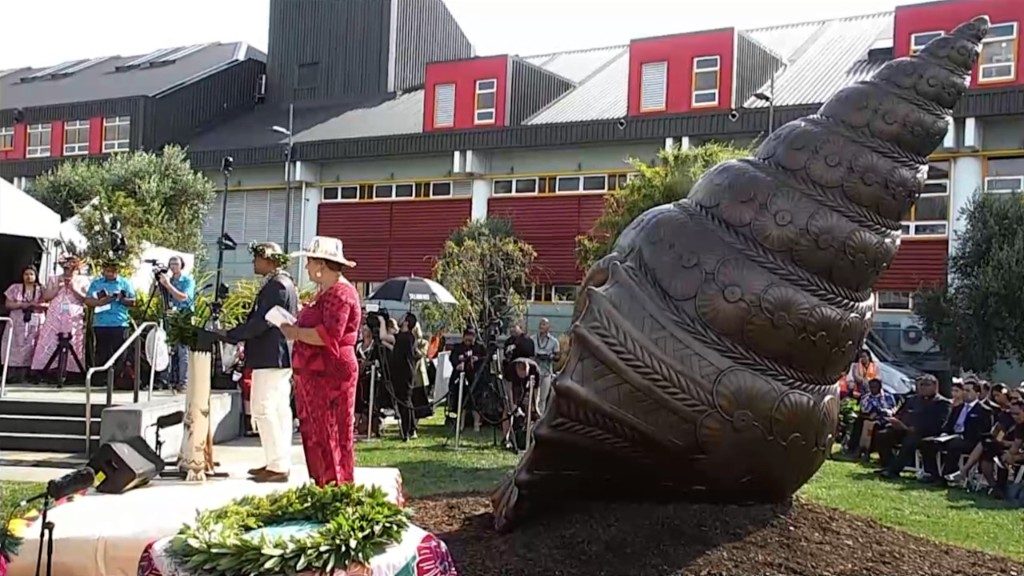 Michel says it was a great learning curve not only for him but for everyone involved in the project. “You had to ask those hard questions, even down to the controversy over the use of the conch shell, whether it actually was from the Pacific. But that was a nice challenge and it got everyone talking and then going all the way back to the Cook Islands to actually go back to the very families and ask them permission, if it was ok just to talk about it.”

John Melhuish says it was an honour to work with Michel and says when Michel first showed him his designs he could tell there was something pretty special about what Michel had come up with. “You could see from the plans of it and the meaning and the layers and the stories, I think it’s one of those things that will be here for a long time and it’s going to sit with me for a long time.”

Brodie Stubbs says he is pleased that after years of planning and discussion that the Pacific Islands were recognised alongside other countries for the contribution that the Pacific made to the New Zealand war effort, and has a place to recognise the special relationship.

In the early 2000s the decision was made to create a memorial Park around the National War Memorial and create a space to recognise the close relationships New Zealand has with other countries with a shared military heritage.The first of the memorials created was for Australia in 2015. There are also memorials for Belgium, United Kingdom and the United States.

Reflecting on the project that was more than three years in the making, Michel says the significance of the memorial is there is now a foundation to empower the young generation. He says now there is a space where Pasifika can go and have that conversation.

And the memorial where it is points to the East. It points right back to the islands. And where it actually sits … where you can sit inside, is where the sun goes down.Michel Tuffery

Michel adds, “the great thing is not only the Pacific memorials but you have all these beautiful memorials that are all talking to each other that have got layers of stories. When you start to walk down slowly towards our Pacific memorial, you go past the Belgium one, past the Americans, so there’s all these beautiful layers and I think it is empowering because now we are part of that jigsaw puzzle and that beautiful space. It’s beautiful to watch these families engage, and claim it for ANZAC commemorations and beyond.”