Nothing could prepare me for the birth of my son or our postpartum care at Auckland City Hospital in November 2021 (Auckland was still in lock down). In less than 40 minutes of arriving at the Labour and Birthing Suite he was born but the euphoria was short lived and our hospital ordeal was only beginning.

I wondered if having brown skin and having a Pacific surname played a part in my postpartum treatment. Surely not…

I remember two months earlier in September, I had read an article in the New Zealand Herald about the problematic work environment at Auckland City Hospital. I was shocked to read that staff were ‘feeling overworked and unsupported in an environment described as toxic’. This made me nervous and I prayed that we wouldn’t experience the flow on effect of this but we did.

Labouring at home was hard and excruciating. I’ve always felt like I had a high threshold for pain but when my husband rang my midwife around midnight to ask if we could go to the hospital, and she said to wait till 4am I was in disbelief. She was afraid we’d be turned away if we went then so we continued to labour at home. By 2am, I was in crippling pain on all fours in the bath telling my husband I couldn’t take it anymore, and we needed to go to the hospital right now.

By 3:08am Baby was here. He was born so fast that he had trouble breathing and was whisked away to the NICU. Not long after giving birth I suddenly felt an intense pain. I asked my midwife if this pain was normal and before I realised what was happening doctors and nurses came rushing in. I had blood clots in my uterus and I needed to have surgery right now to get them out. Anesthesiologists and surgeons stepped into the room and I was told they would get the clots out by any means necessary.

Worst case scenario they’d remove my uterus, best case scenario they’d get the clots out on the operating table. After signing forms I was wheeled into the theatre and before long I was on the surgical table taking deep breaths of gas. As I lay there I couldn’t believe I had just given birth and here I was about to have an emergency surgery. I said a quick prayer and went to sleep.

I woke up groggily in recovery to the chatter of nurses and doctors. I had lost around 2.5 litres of blood. My surgery had gone well but my blood pressure was very high and needed to be monitored. From recovery I was transferred to a room where I’d wait to be admitted to the ward. My husband patiently waited all day for me there.

Not long after coming out of recovery I was asked to try and express colostrum for Baby. This was hard as I only held him for a few seconds before he was taken to the NICU, and I hadn’t had skin to skin with him.

A few hours later I was taken to my room and told that Baby would be joining me as he was breathing on his own. Because I was having difficulty with breastfeeding, every few hours a midwife would be in our room giving Baby formula. We asked the ward midwife taking care of us if my husband could stay with us after the traumatic day Baby and I had had. We were told that he had to leave because of the COVID-19 visitor precautions. I had no idea what to do and I was still processing what had happened to me. Later I found myself alone in a room with a new baby scared. Not once was I offered support or even asked if I was ok.

By the next morning I would have a new midwife taking care of us and we’d have to start again. Most of the midwives that looked after us were caring and patient but some were horrible. Each morning and evening shift we’d get a new midwife. I had read that my husband could stay if we asked the Lead Midwife on night shift for permission so from Tuesday to Thursday night we made sure to ask.

We ended up staying in hospital from Monday to Friday, and by Thursday night I broke down and sobbed. My husband and I tried to stay positive through everything but I had reached my breaking point. I was so upset at the attitudes of some of the midwives and nurses whose energies made us feel horrible. I just wanted to go home. I was so vulnerable and physically weak, I couldn’t take it anymore. My mental health had taken a beating and I wasn’t coping very well.

I could understand that the caseload may have been heavy for the midwives and nurses while we were there and that could contribute to their stress and attitude. But what I couldn’t understand was the blatant lack of care for me and my new baby. When Baby was having a hard time latching and staying on the breast I was made to feel like there was something wrong with him, and he wasn’t working hard enough.
I got teary too when one of the midwives called Baby lazy because he’d stop feeding after a few gulps… he was only a day old and she said that.

One midwife in particular would sigh heavily when she walked into our room like we were a nuisance, and told us she was “determined that he was going to get this”. I was asked by this same midwife how to pronounce my last name when she transferred me from recovery to the ward, and when I replied with “mBale ndroka ndroka”, the midwife retorted that she’s “not going to bother getting that”.

Her energy was negative every time she came into our room, even when we thanked her for helping us. Multiple times she forgot my paracetamol and forgot to fill out baby’s feeding/poop/pee chart. We only found out about the chart when she came into our room just before her shift was about to end and asked us what times the baby had fed, pooped or peed. We didn’t know we had to keep tabs on that, and when she left us for the evening we looked at the chart and she hadn’t signed any of the times she was on shift. But copied the answers we gave.

We also found that our notes were not being passed on thoroughly each shift, and some midwives would tell us outright that they hadn’t read our notes at all. Many times throughout our week we were told to press the call button by our midwife for that shift so she could see how Baby was latching or if Baby needed formula.

A few of the nurses and midwives who would come in when we signalled for our midwife were cold and seemed annoyed that we pressed the button. Like we were a bother asking for our midwife who told us to signal her. This was the case with multiple midwives who looked after us, who would say “give me a buzz when you’re ready…”, we would give them a buzz and then be treated like that. It hurt and it was tiring.

Both Baby and I were being monitored, and each time the midwife on shift would see us they’d take our temperature and blood pressure. I was on blood pressure medicine and paracetamol for my pain.

There was one midwife we had twice on night shift during the week who was our absolute favourite. She had a bubbly personality and I felt like she genuinely cared about us. That made all the difference to me. I just needed someone to care and to share information with us.

We were told that a Lactation Specialist would be coming to help us with breastfeeding. She would give us really good advice, she would help us solve our feeding issues and come up with a plan of action. I was relieved to hear this and so we waited expectantly.

The following day the first Lactation Specialist came power walking into our room breathless. She asked us a couple of questions, stayed for ten minutes showing me the same breastfeeding positions that the midwives had, and then quickly left the room. She told us she’d pass on notes to our midwife on shift but she never did, and we never saw her again.

Each midwife we had we asked how we could be discharged or what do we need to show to be discharged. I was unaware of my rights and felt like we needed to prove ourselves to leave. I was made to believe that Baby would need to be fully breastfed and formula was off the table.

The next two lactation specialists we met were wonderful. They gave us facts and numbers, told us what could help increase my supply and gave us an actionable plan. The last lactation specialist we saw helped us get discharged with a plan for feeding at home.

When we got home and I spoke to my main midwife she encouraged me to do what I felt most comfortable with, and told me “a fed baby is best”. So we bought formula, and have been doing a mixture of breastfeeding, express feeding and formula feeding over the last three months.

In amongst all of this, it didn’t escape my attention that the only Pacific hospital staff who helped me were the anaesthesiologists in my surgery but there weren’t any Pacific midwives or nurses. Most of the midwives were Caucasian, from the UK.

One of the Asian midwives told me my whole last name took up the whiteboard so “they couldn’t even see what my first name is”. I think they just saw a really long Pacific Islander last name and made assumptions about me because when they’d meet me and start talking, and hear my accent they’d have a surprised look on their face.

The beginning of my Motherhood journey was challenging and painful, and I wouldn’t wish our experience on anyone. It goes without saying that if we are blessed to bring another child into this world, I would rethink about which hospital I should give birth in. I don’t think the midwives at Auckland City Hospital are terrible people but they do need support, and something major needs to change.

Elissa is from Sawakasa Vou in Tailevu, Fiji and Oneata in the Lau Islands and from Samoa, the villages of Fagali’i, Fasito’outa, Iva, Fusi in Savaii and Afega. The graphic designer lives in Auckland with husband Dillon and baby. 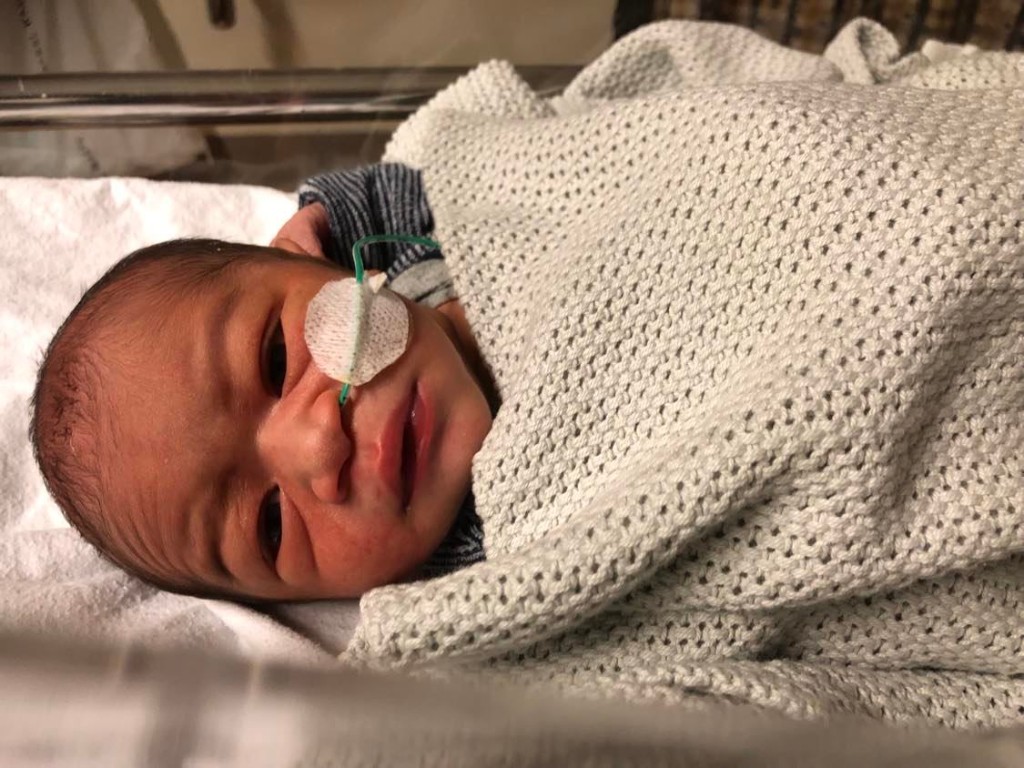 Pasifika Wire is proud to support our Pasifika perspectives and provide a platform for our Pasifika voices. All opinions are those of the author.