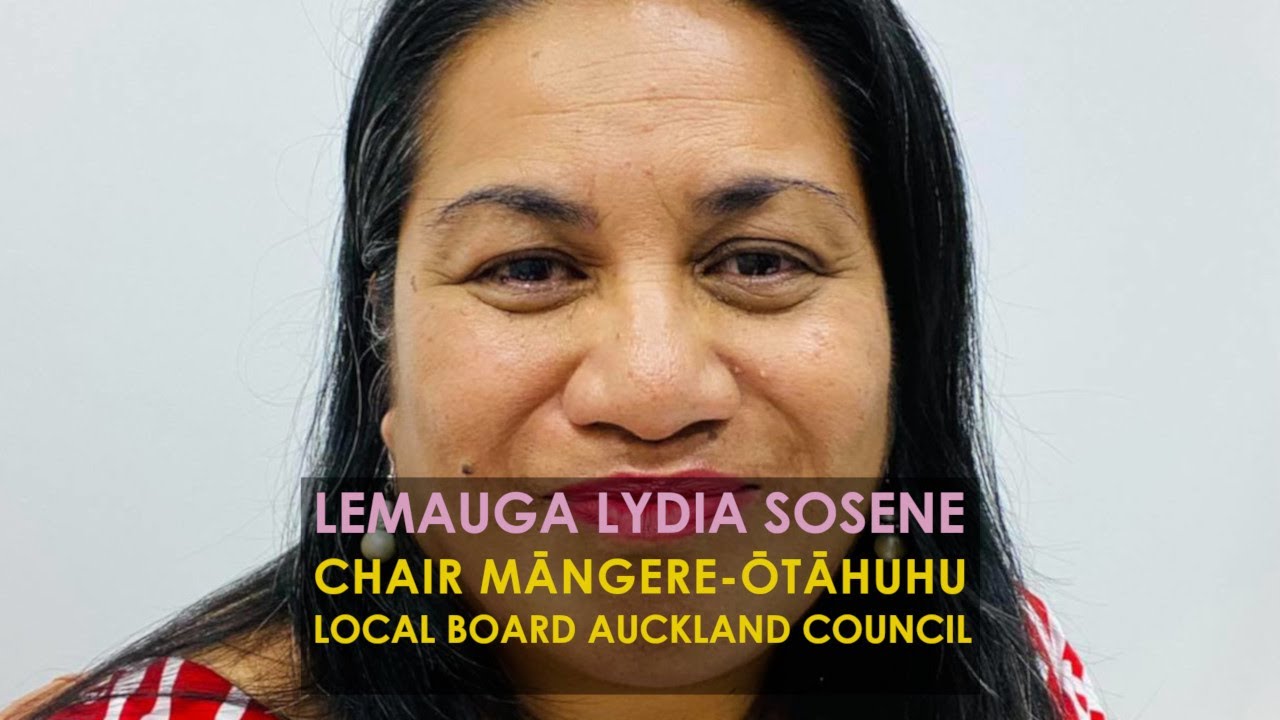 Or listen to the full podcast on Spotify

While the decision to step into the political landscape was not the first career choice for the Chair of the Māngere-Ōtāhuhu Local Board within Auckland Council, Lemauga Lydia Sosene says she has no regrets about the choice she made more than a decade ago. Armed with support from family, friends and colleagues and her own natural curiosity after her years working for Parliamentary services, it has led to a career Lemauga describes as tough, but a privilege.

“It’s a very serious role in terms of the decision making process and you are leading the team to enable them to (a) provide information that is received from within Auckland council, and secondly is the ability to debate and come up with a resolution recommendation with your team and usually it’s the Chair that would be the spokesperson of the local board.” The role of the Chair of a local board of Auckland Council has a co-governance model comprising of 20 councilors who look after Auckland.

Alongside Lemauga is a team of seven local board members who look after the Māngere-Ōtāhuhu suburb for a population of approximately 80 thousand citizens with the highest youth population in the country. Lemauga is proud of their ward and its diverse makeup, with approximately 60 percent Pasifika and 18 percent Maori and a mix of European and ethnic diversity.
As Chair, Lemauga undertakes several tasks which involves providing a strong governance leadership role as well as preserving the integrity and reputation of the local board, dealing with media on behalf of the board.

One of the main priorities for the local board is to ensure constituents have full access and use of public parks, swimming pools, libraries and community hubs. Keeping costs to a minimum or free access is part of their ongoing work as well as keeping track of the facilities and the ongoing work involved with maintenance of buildings.

Lemauga says like all suburbs Māngere-Ōtāhuhu has its share of challenges. Too many liquor outlets, takeaway bars that are readily available are issues they continue to work through. She says there is also the ongoing issue around transport, buses, walkways and cycleways. She says there is a lot of work done on the ground to advocate for better roading, lighting, and footpaths.

Lemauga is also a fierce advocate for South Auckland. She says with so many positive stories she is proud to showcase the good things coming out not only from Māngere-Ōtāhuhu, but South Auckland in general. However it is not lost on her the way South Auckland is often portrayed by media.

“There are far more positive stories of our youth, our families, local businesses and our community. But the media unfairly, in my view, voices or puts on the podium just issues that are highlighted here specifically around violence, education and ill health, and yet we have those challenges just like other communities.”

Media will not put that view across, will not celebrate what we see. People like myself in different leadership roles, we don’t see what’s happening on the ground fairly reflected in media articles and so there’s sometimes quite a misrepresentation that probably gives an unhealthy view. But I can tell you now, I breathe it, I live it day in day out and I see quite a different innovative South Auckland. Lemauga Lydia Sosene

Lemauga thinks back to the work of her parents and their Ministry and their ongoing work to support their family in Samoa and in the wider community. She says it is a driving force for the work she does. She says while the hours are long she enjoys this space and says the learning never ends. Lemauga is reminded that her core role is to support and work for the community, to listen and be a voice for those who do not feel like they have one.

“I take advocacy very seriously because I’m in this role I put up my hand to help the people that don’t have a voice or feel that it’s too hard to come and talk to a group of people. So you need to make that call quite early if you’re going to step into being an elected member. You’ve also got to be resilient in your own mind, in your own way, in your own support group because you do get a lot of people who don’t agree with you.”

She admits navigating her way through the world of the Auckland Council can be overwhelming and offers some advice to those who would consider this as a career. Developing her own framework  Lemauga says a common question she has been asked over the years is what does Auckland Council actually do? Lemauga says she prepared a one-pager tool she uses when describing their work.

The analogy that I use, when you wake up in the morning you go to the bathroom when you turn that tap on (water), that’s Auckland Council. When you come out of your house you look outside and some people have a fence, that fence you need to apply for a permit, that’s Auckland council. When you drive out on the road there’s a road, a footpath, there’s lights in your street. That’s all Auckland council.Lemauga Lydia Sosene

She says because Auckland Council is so big she has had to learn how to receive information, decipher it and then  explain it in layman’s terms. Through it all Lemauga knows this is her calling and loves every minute of her job.

“I wanted to do some good things for our community. My advice to anyone that wants to stand to be an elected member, whether you’re going to go into local or central government, it would be good if you actually went along to your local elected representative and talk to them. Volunteer your time, get a glimpse of what’s involved.”

I am always grateful for today. I don’t know what will happen tomorrow but I want to be a part of the team that is planning. If we can communicate, and if we can support one another when we are making decisions and implementing some of those decisions, that’s got to be a good thing.Lemauga Lydia Sosene