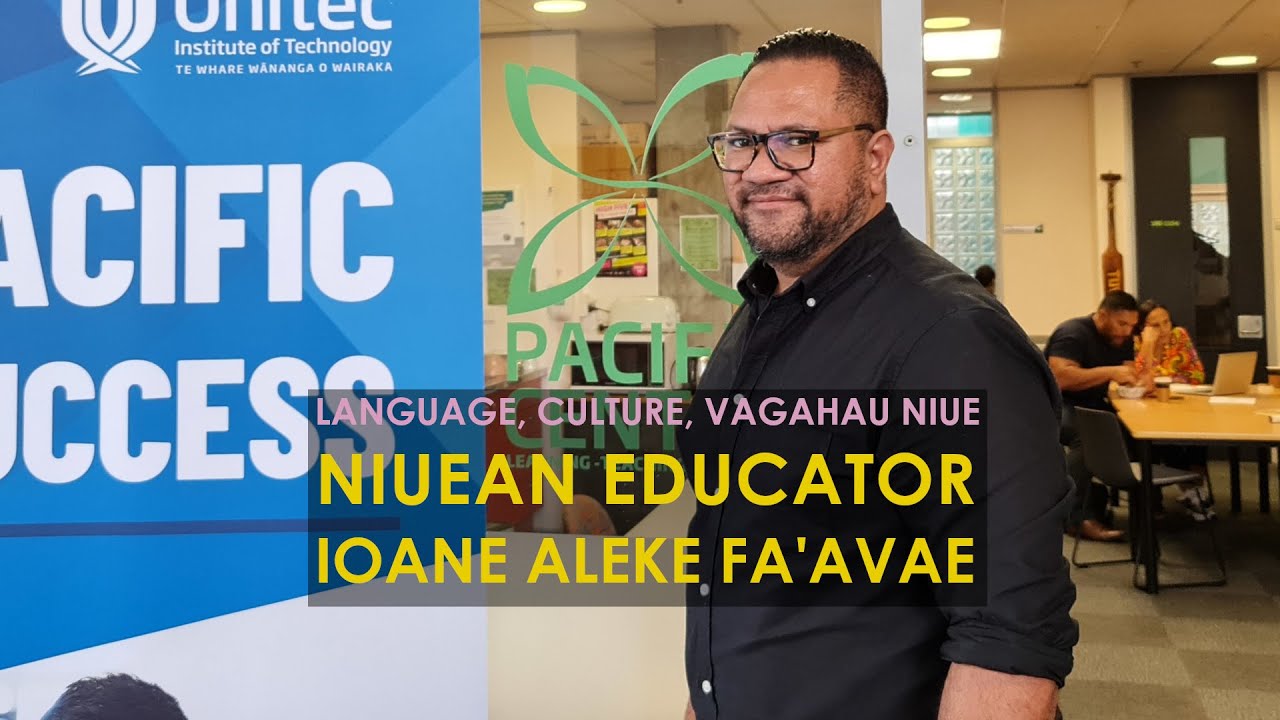 Listen to the full podcast (24 min) on Spotify

Having worked across several disciplines in creative arts, media and theatre, Ioane Aleke Fa’avae has found his way  back to the Education sector, pursuing his passion to provide ongoing support for students and develop a framework to maintain and teach Vagahau Niue at tertiary level.

Of Niuean, Tongan and Samoan heritage, Ioane works across two tertiary institutes in Auckland. He is a Pacific Learning Advisor at Unitec and a part time lecturer teaching Vagahau Niue Level 3 at the Manukau Institute of Technology (MIT). MIT is the first tertiary institution in New Zealand to offer Vagahau Niue at that level. Ioane is currently in the process of developing the Level 4 framework for 2022. He says it’s an exciting time for Vagahau Niue language.

It shows that our community really cares about our language especially the first, second, and even third generation New Zealand born Tagata Niue who are being encouraged to learn their Vagahau Niue and culture. Ioane Aleke Fa'avae

Reflecting on his own journey Ioane identified gaps for Tagata Niue in the New Zealand Diaspora. He says there was a time where Vagahau Niue was not encouraged or promoted. He says there is a need for Pasifika people to know the language and culture. It is a driving force for him to promote, revive, and maintain Vagahau Niue.

Ioane says whether you’re fluent or not in a Pasifika language it is part of who you are. “It’s part of your identity. While we may not all be fluent, we can have an understanding. Even if you’re not able to fully understand a conversation in the language you get an understanding of the cultural protocols. Learning and knowing your language plays a major part as a Pasifika person living here in Aotearoa.”

The history and culture of Niue is another key aspect for Ioane who presented at the Australian Association for Pacific Studies’ online conference held at the University of Waikato this week alongside his colleague from AUT University of Technology Sam Pilisi, decolonising Niue Takalo as a war dance.

“The concept is to decolonise the imagery Captain Cook had when he landed in Niue in 1774 and named the island Savage Islands. We’re trying to decolonise that imagery of being Savages. According to historical accounts Captain Cook labelled the Niuean warriors as savages and cannibals because their traditional war dress comprised of teeth painted red and smearing black charcoal on their bodies,” says Ioane.

He says it is stories like this that have been stuck in the literature and continue to be told through history. “We need to tell our stories and tell it how we view it from an indigenous person or a Pasifika person living in Diaspora. We need to decolonise this type of thought that were imposed and written by Europeans in history books.”

However Ioane is optimistic that change is on the horizon. With more than twenty thousand people of Niuean descent residing in New Zealand, a further five thousand in Australia, with less than two thousand living in Niue, he says there is no time like the present to help promote the survival of Vagahau Niue.

Despite the lack of resources and people in this space, Ioane says there is an opportunity to create projects for our own people.

If we look back in time 20, 25 years ago we weren’t really encouraged to speak our languages but nowadays when you go out to look for a job as part of the criteria you need to have an understanding of a culture or a Pasifika language. To me it has an economic value.Ioane Aleke Fa'avae

According to Census 2013 to Census 2018, data show that the proportion of speakers of Pacific languages in Aotearoa has declined across the board. This week Minister for Pacific Peoples, Aupito William Sio, reopened the MPP Languages Funding round for 2021. The Wellbeing Budget 2019 delivered a $20 million package to MPP over four years to support the revitalisation of Pacific languages.

Ioane says it’s important we keep the momentum going to learn our Pasifika languages even after the Pacific language weeks have ended. He accepts it can be hard and people can be discouraged when trying to learn a new language. “I always encourage my students to be positive and ignore the type of deficit thinking or negative feedback that people tell them.”

Culture evolves as does language, take ownership of this space and embrace your culture and language nobody can take that away from you.   Ioane Aleke Fa'avae